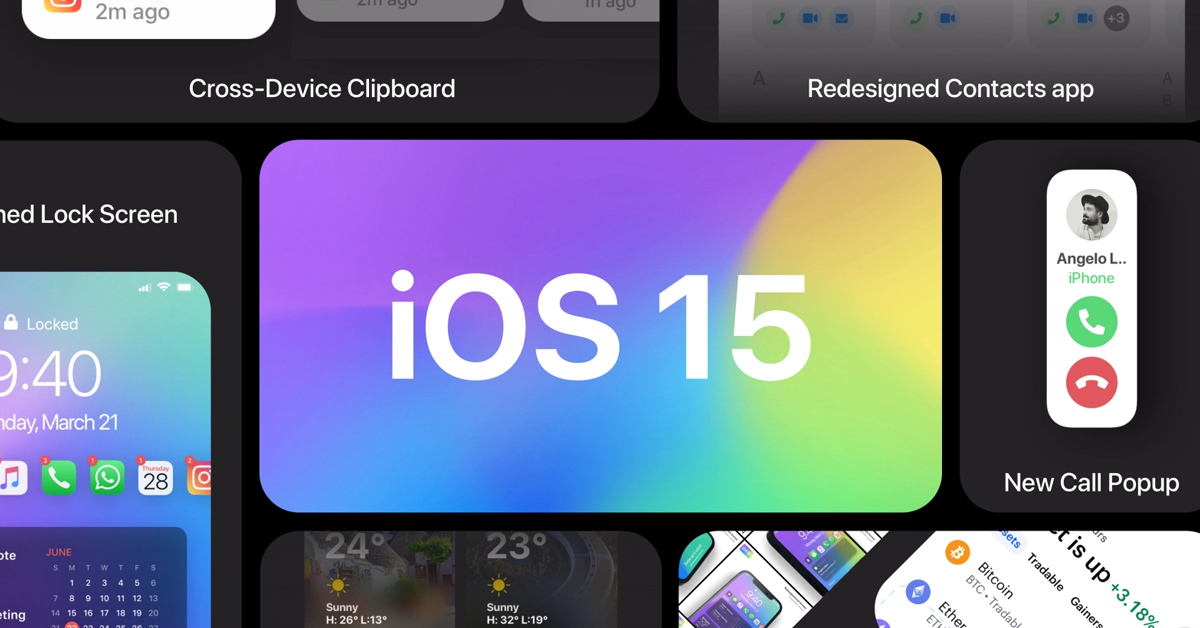 Apple previewed iOS 15 in WWDC 2021. The first and second developer beta versions were released on June 7 and June 30, respectively. Six days later, the first public beta was out and available for mass review, compatible on iPhone 6S and later devices, with a full release anticipated in the fall.

The new iOS 15 features did not disappoint! Far from it, in fact!

Apple intimated users of its investment in new software features a few weeks ahead of WWDC 2021. With iOS 15 public beta, we see those changes in action- from the heightened focus on accessibility to eye-tracking, voice-over, sound-enabled switch control, and much more. The cherry on top of the much-enhanced FaceTime, brand-new SharePlay experience, plus the improved iOS 15 on-device intelligence system.

Here’s a run-down on all the upgrades iOS 15 brings to the table. We’ll also explore the three most powerful ones that might change the game.

A preview of iOS 15 new features

With this 2021 update, Apple brings power to the user. iOS 15 facilitates user comfort, helps you stay in touch, be in the moment, and get more done.

In iOS 15, FaceTime calls have broken out of the Apple ecosystem somewhat. Now, they are more natural and available (in a limited capacity) to Android and Windows.

With SharePlay, Apple has opened the path for better-connected experiences as well.

The redesigned notifications are easier to manage, as are the Weather, Notes, and Messages apps with personalized emojis. You can quickly access search, explore maps in more detail, experience more efficient browsing through Safari’s tab bar grouping, and reduce distractions via Focus- a new feature.

These new iOS 15 features present a polished way to deal with our present world. From making FaceTime accessible across major mobile OSs to introducing a smart system designed around a user’s focusing needs, iOS 15 expresses helpful AI at its best.

Let’s talk about the intricacies of the three most impressive ones-FaceTime, SharePlay, and On-Device Intelligence. Here’s a thorough overview.

In what’s being called an open response to Zoom Video Calls, this move has enabled Android and Windows users to join FaceTime calls via a browser. However, scheduling or starting a call will still require an Apple account and device. Joining it will require a link and no more.

Then, there are the other FaceTime upgrades.

The Spatial audio feature allows calls to flow more naturally. Individual voices are projected from the part of the screen where the speaking individual is positioned, creating a sense of real-time conversation for callers. This function, however, currently works on the Apple devices with A12 bionic or its later versions installed.

The Grid view distributes all FaceTime participants in similar-sized grids across the screen. The speaker’s grid is highlighted for clarity. This iOS 15 FaceTime feature is slated to enhance the quality of group conversations by a large margin.

Inspired by the camera feature, iOS 15 lets users choose the Portrait mode during video calls. You can blur any background and put yourself in focus during a call with a single tap.

SharePlay is an entirely brand-new way to connect while in isolation. You can use SharePlay to share activities while on a FaceTime call- watch movies, listen to music, look at photos, browse the web, and share experiences simultaneously.

When using iOs 15 SharePlay, the playback is synchronized on all participating devices to ensure simultaneous media sharing. The controls are also synced. The whole group can add songs in the queue, swipe, play, pause, zoom, etc.

And, when you talk during the streaming, the volume is automatically adjusted to accommodate seamless conversations.

SharePlay is also an excellent business tool. Big names like Disney+, HBO MAX, ESPN+, Paramount Plus, TikTok, and other similar ones have already started integrating SharePlay into their apps.

Even small businesses can take advantage of this opportunity. You can create activities in your app and encourage users to share them with their group, imparting a connected experience.

In the iOS 15 supported devices- iPhone 6S and later -there is a lot of retrievable information that, if used appropriately, can enhance a user’s experience. On-device intelligence uses that data to quickly resolve queries, fetch results, suggest, and discover.

In iOS 15, on-device intelligence can be seen across various features.

This new iOS 15 feature works in devices with A12 Bionic or a later version of it installed. You can tap on the highlighted text in any picture and perform certain actions on it. These include-

Live Text also supports the Camera. So, you can directly point to stuff and use information captured in the picture. Plus, translation support for seven languages- English, Chinese, French, Italian, German, Portuguese, and Spanish -makes it easier to utilize Live Text.

With Visual Look-up, you can learn more about the object in your photos. Just tap on the item of interest in any image- be it about art, nature, books, animals, etc. -and Siri will pull up a knowledge bank about the same.

The Focus feature in iOS 15 enables users to filter notifications based on their current focus. This custom setting can be used to only allow selected apps to send alerts while blocking the rest.

Spotlight uses on-device intelligence to showcase all information available to a user on any certain search query. You can use this new iOS 15 feature to retrieve contacts, search for photos, look something up on the web- without ever leaving the lock screen.

The complete iOS 15 release will be here before we know it. For users and developers, it presents opportunities- to do more and better -whether it be personal usage or business-related iOS app development and integrations.

In Fall 2021, likely between September and November

Which Phones Are Compatible with iOS 15?

Use these links- direct from Apple – to know more about the new iOS 15 features, what you can achieve with them, and how to best utilize this new mobile OS update for your goals.